Double Trouble is a unlockable appendix and playable feature in Eyes, costing 600 coins in the store.

-Collect all bags needed/get back to the exit

It's overall gameplay is the same. The main difference is now that both Krasue, and Charlie are the main threats of either maps. They will float around the location to search for the player making it much harder to survive, or avoid. 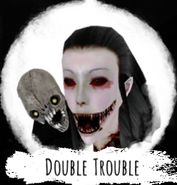 In the store (Old)
Community content is available under CC-BY-SA unless otherwise noted.
Advertisement